Leon Seesix, better known by his moniker Dotmasters was born and raised in London. In the early 1990s he started painting on the streets of Brighton. Fast forward over two decades later and he’s a world-renowned artist and we’re lucky enough to have him create bespoke pieces for our Six Storeys, Tanner & Co. and Victorian Bath House Camm & Hooper venues.

I’ve recreated a few bits and pieces that I usually stick up on the street in the venues.  I stencil wallpaper on walls as a background for my Rude Kids series and Debra [managing director] thought this would work in the corridor for Tanner & Co downstairs. 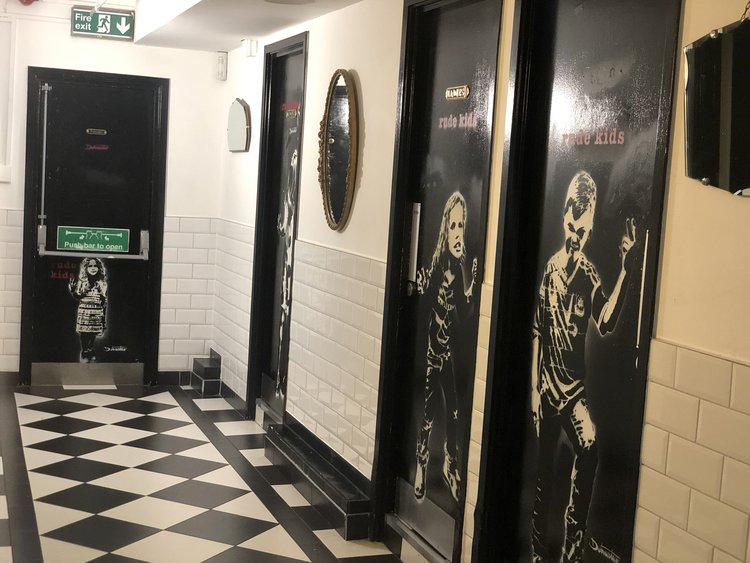 Rude Kids originally started on Bermondsey Street, which is where Tanner & Co is, and we wanted to bring a bit of the street inside. I love bringing the inside outside and outside inside. I like to do wallpaper-esque indoor type pieces outside and street art inside. It keeps people guessing.

I was then invited to an open house at the Victorian Bath House and saw that the walls were pretty bare, so after speaking with Debra we also agreed that some wallpaper stencilling would work there too. I’m planning to go into Six Storeys and shake things up a little there as well.

I knew Debra, the MD of Camm and Hooper already, through mutual friends.

I haven’t yet seen Six Storeys believe it or not. My favourite is Victorian Bath House.

I’m doing a new series called ‘Stick ‘em up’ – which is effectively different objects stuck to walls with gaffer tape. Whatever is new is usually my favourite at the time of asking… So at the moment – that’s it!

5.     Are you often asked to create exclusive works for clients? If so, do you tailor your work to the space? Or do you just go with the flow?

Yes, all the time. I’ve done a broad range of commissions in an interesting range of spaces, from very high-end houses to trailer parks. I’ve done some very exclusive and bespoke things for some rather wealthy folk out in St John’s Wood and also some unique pieces in Mallorca villas. But I’ve also done caravans at Glastonbury.

It’s an interesting process collaborating with whoever has commissioned some – it takes a lot of time and consideration. It’s not graffiti at the end of the day, it’s something someone has to love, and it has to work in their home, or whatever space they commission it for. It’s very personal.

I like doing this sort of work. It really brings out a different creativity inside me, as it’s not just my own feelings and ego I’m creating and working with. I am working with someone else and for someone else.

6.     What’s your view on art in hospitality spaces? Does it usually just fill blank walls or really add to the experience (if done well)?

It depends. Steve Lazarides (Banksy’s old manager) did a series of installations near The Old Vic. He created an art gallery in old railway arches and brought in a Michelin starred chef too. What an incredible space that was. So, it can work. It can just be any old b*ll*cks though.

I worked with the Beckhams and Elton John on their weddings as an event producer. So that sort of taught me my way around how art project can marry (ha) up with an event space.

On the streets. And anywhere the paint dries quickly. LA, Bali… New Zealand was OK, bit cold though.

The world is a very beautiful place. The Himalayas are beautiful, Wales is beautiful… I think it comes down to the mixture of people and the space you’re in.

There’s a field on Worthy Farm (Glastonbury festival) that is probably my favourite spot ever. 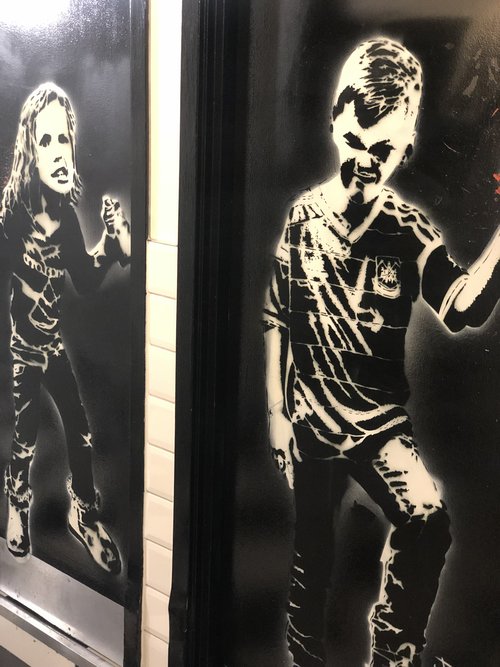 8.     What jobs have you done other than being an artist?

I’ve done everything. My first job was mapping – I’m a trained cartographer, I was trained by Ordinance Survey. I’ve also done displays for Louis Vuitton stores and graphic design.

As an artist, you have to do a bit of everything.

Running out of cigarettes on a Sunday night. I won’t mention the Br#### word…

I’m not an angry person really. I lead the live I want to lead and that makes me happy. 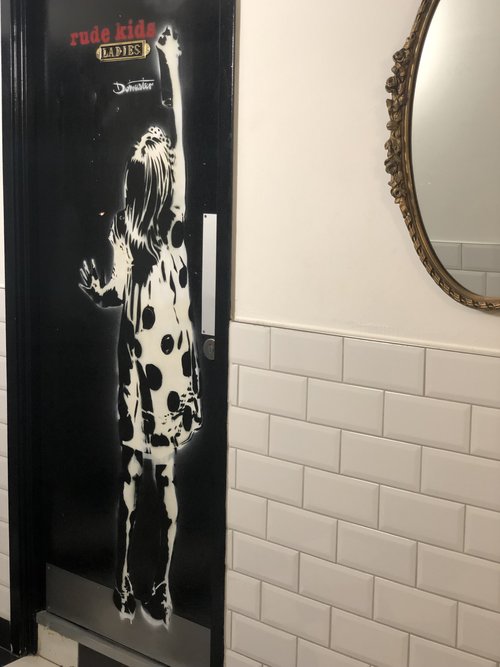 Lots of things inspire me. My wife is definitely one.

Every time I dream of a project, I end up doing it. I co-run a field at Glastonbury. I do the Unfairground. This was always a dream of mine and I did it. Now I’ve got it and it’s great.